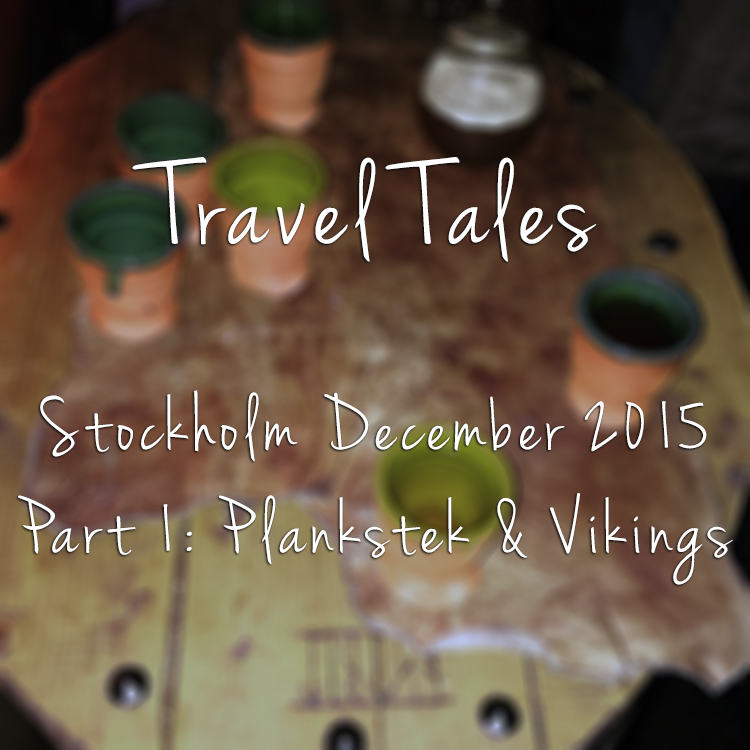 As the plane drew in to land, I couldn’t help but notice the patches of Scandinavian pine forests that decorated the landscape, even though this was a city break, it still pleased me. To visit the Nordic forests has always been something that interests me, and seeing them as a reality was the best start to my trip.

Once through the airport arrivals, a taxi took us to Stockholm. We passed through industrial areas, large retail parks and office blocks, and even though it was only about 3pm, it was dark so there was not much to see. According to the weather app on my phone, the sun tends to rise at about 8:30am and then sets at about 3pm, though having spent time in Lapland (Finland) before, this is not something which worries me.

The first part we see of Stockholm itself is the new town, Christmas lights, modern shops and restaurants line the wide streets, in all honesty, we could be in any metropolitan city in Europe. It isn’t until after check in at our hotel that we are free to explore Old Town, Gamla Stan.

Our hotel is right opposite the bridge into Old Town so it takes us just minutes to walk across. The atmosphere immediately changes, modern roads turn to cobbled streets, large chain stores are replaced by independent toy stores filled with traditional wooden toys, vintage record stores and a huge array of restaurants and cafes.

We explore the town, it’s only small so you can walk across it in about 15 minutes. I can’t help but take photos of the winding streets and cobbled tunnels, the Old Town is just so atmospheric.

It’s only 5:30, but the smell of the delicious food around us makes us realise we’ve not eaten since breakfast. We find ourselves in a small square, outside a restaurant called Järntorgspumpen Grill & Bar. The board displayed their special of Plankstek – Fillet of beef on a wooden plank…there was no thought needed, how could we say no?!

I later found out that the restaurant building itself dates from the 1400s and the house itself used to be a chandlery. The restaurant is cosy and inviting, with its restored brick walls and stone arches. I order a glass of the house red, perfect to go with my steak, and we all ordered the Plankstek as our main. I’m pleased to say, we were not disappointed.

It was served on a wooden board as promised, and the steak was accompanied by mashed potatoes (which we found out later to be Pomme Duchess) and a tomato wrapped in bacon. The steak itself was cooked well, I personally like my steak rare, and though they seemed to prefer to serve it medium-rare, I could not complain as it tasted delicious. The potatoes had us all curious as to what was in them to make mashed potato so tasty (more on that in the next posts!) and I have to tell you, the tomato wrapped in bacon was a revelation, this will definitely be added to my repertoire!

After our meal, we continued to wander the streets, it’s only a small town but there are so many alleyways there’s a lot to explore. We stumbled across an antique shop, Kreuter Antiques. My boyfriend Joe was looking at antique swords and jewellery but I got distracted by an amazing helmet from Azerbaijan. The detail in its design was amazing, I could not stop staring at it. I managed to get some amazing close-up photos which I’ll be retouching soon and adding to my portfolio. I wish I could have bought it but I found out that even though the main stone was missing, it was still worth about €10,000!

After leaving the antique shop, we continued to explore until we came across an archway in one of the buildings. At first glance, we did not know what it was. All we could see was an arch surrounded by runes, we were all intrigued and just had to see inside. We passed through the archway, walked down the stone steps and through a door into the building. We were immediately greeted by a bearded man in Viking garb, who greeted us warmly and asked ‘Eating or Drinking?’. ‘Drinking’ we all replied, and we were directed into the bar.

It was at this point that we realised we had been lucky enough to stumble across the famous Viking Bar – Aifur Krog & Bar. Aifur specialises in mead, so of course I ordered a classic mead, but Joe went for a more specialist Spruce Pine and Honey mead, both were delicious. They were served in small terracotta cups which fit the scene perfectly. The walls were lined with Viking style shields and weapons, the tables were rustic and laid with leather cloths and the staff were all dressed in Viking outfits, even the bard playing the hurdy-gurdy (I didn’t believe that was its real name…Joe had to explain it to me…).

We were lucky and managed to get a table by the stairs leading down to the restaurant, people were sat on long wooden tables, it was very communal so it really felt like a Viking dining hall. We were also in the best seats to witness one of the unique things about this restaurant first hand.

Every time a new customer arrives to eat at the restaurant, they are announced, to the entire restaurant and bar. The man who had greeted us at the door would stand with them at the top of the stairs before shouting at the top of his lungs “Ladies and Gentlemen, we welcome Maggie*, and she bought her friends from Canada!” At which point the entire venue erupts into cheers, applause and foot stamps, it was fantastic!

*I don’t actually know who Maggie is, I just happened to film her entrance so that’s the one I remember!

After many cheers and stamps of feet, and thoroughly sated with mead, we decided to head back to our hotel. That night we were exhausted from our day of travel, but excited at what was to come in the days that followed.

I hope you’ve enjoyed reading about my trip so far, have you ever been to Stockholm or any of the places mentioned in this post? Would you like to go? Let me know in the comments below, and don’t forget to look out for part 2!

Trying to Live the Good Life